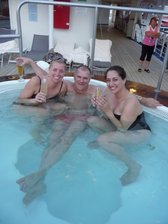 In 2008, I went on a Mediterranean cruise with my mom. Every evening, I had cocktails in the hot tub with the loveliest couple, Marci and David Anderson. One evening, they were telling me about how they run a Greyhound and a Galgo rescue, Steel City Greyhounds. Our cruise was ending in Barcelona, and their plan was to bring five Galgos back to their rescue and find them good homes.

As an animal lover (in all fairness, I was a "cat person" at this point), I was floored that I had never heard about Galgos. One evening, I went to my cabin and researched them on the Internet. I was disgusted by the pictures, and was driven to make a difference for at least one dog. I found Marci and David in the dining room and told them that I wanted to take a dog home. I had never had a dog, and had no clue what to do with one, so my plan was to find the dog a home through my local Galgo rescue in Denver, Colorado.

The day before we departed our ship, we arrived in Barcelona. David and Marci had already arranged a dog for me with Anna, the director of SOS Galgos. We had lunch with Anna and spent the day walking around with her Galgos. I soaked up as much knowledge as I could, and kept wondering how I could help these poor dogs. I learned that over 50,000 are abandoned every year. It's an astonishing number, until you realize that more than double that are bred. That means the other 50,000+ are killed in in less-than-humane ways. It took all I had to not crumble in to a ball of sobbing mess during our outing.

After our walk, we returned to meet a lovely woman waiting outside of Anna's husband's vet practice. At the end of the leash in her hand stood a scared pup, known as Dehesa. I stared at this creature and thought, "what the hell am I doing?" I had no clue what to do with a dog, and here she was- a poor, abused and injured dog, relying on me to give her a better life. (The photos in the heading are the moment we met each other. We both look scared s*itless, don't we?)

The next day I arrived at the airport, and there stood Anna with a gaggle of Galgos. One was loaded in to a crate and put on my flight, the others were headed to Pittsburgh with the Andersons. Twenty-six hours, and three flights later, "the dog" and I arrived in Denver. I will never forget getting her out of the crate, breaking it down, trying to grab all of my luggage, and asking a porter to help me get to a cab- at midnight. I hadn't slept since we left Barcelona, and was utterly exhausted. I started crying as I realized that this dog at the end of the leash, now in my hand, had no clue where she was headed. Moreover, without a doubt in my mind, I could feel her lack-of-want to live. She walked obediently by my side, to the curb, and climbed in to a taxi cab- certain that she was headed to her death, and she had come to terms with it. I continued to cry the entire way home.

Over the next few weeks, this dog (whom I was "fostering", and thus, didn't name) did nothing but sleep, eat occasionally, and sleep some more. She had nightmares all day and all night. She would actually scream in her sleep. I didn't know what I was doing, and though I considered keeping her, felt she would be much better in a home with an experienced dog person. One morning, I looked in the crate to see how "the dog" was doing. She lifted her head, looked at me, and then it happened... I saw her tail wag. It moved all of an inch, but it was a wag! More importantly, it wagged for me. That was the moment I knew that she was already in her forever home.

Six years later, that tail wags all the time. I can't imagine not having Daphne in my life. She became a dog- you know, the kind that run and play and do doggy things? And I became a dog lover- something I never thought I would be.

My mom chose her name, Daphne. It is to remind me where she came from, and in honor of the woman who saved her and gave her her Spanish name, Dehesa. Thank you, Inma... I am forever grateful. Thank you Marci, David, and Anna... I am forever in your debt.
Powered by